taking to the news papers

Today i was talking on Nova about my ghost hunting with Fitzy and Wippa 96.9.  The boys was so good to talk to and had alot of fun.  The boys say they like to come out with me one night on a ghost hunt and i did say yes i will take them.  I did have my girl friend karlie with me as i talk on the radio and she had fun talking to the boys as well.  Today the new movie Paranormal Activity 4 comes out on DVD today .  Karlie and I have seen it and i do say to go and get the DVD and see how good it was. Here is some photos when i was with the boys from Nova 96.9FM 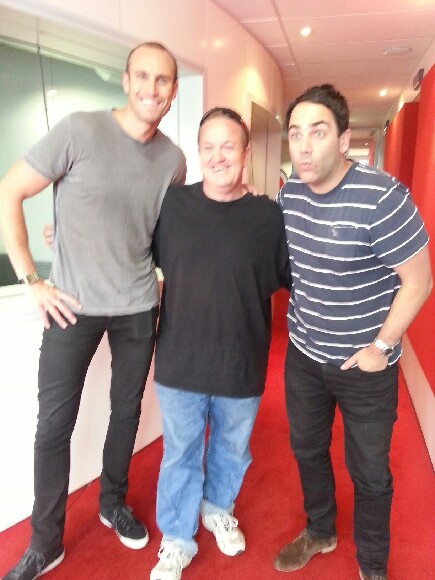 On the 05/07/12 i like to thank ABC for inviting me and Karlie into ABC radio to talk about my ghost hunting and it was so fun to do. Here are some photos from today. This is what we talk about on the radio

- Who called you and why

- What you found – describe the whole session

- What do you expect to find

- Why do you this – what is the rationale?

- You have a passion for this – why (your brother’s death)

- When people ask you proofs – what can you show them

- What’s the significance of ‘orbs’?

- Have you ever got out of your depth? How frightened have you been? 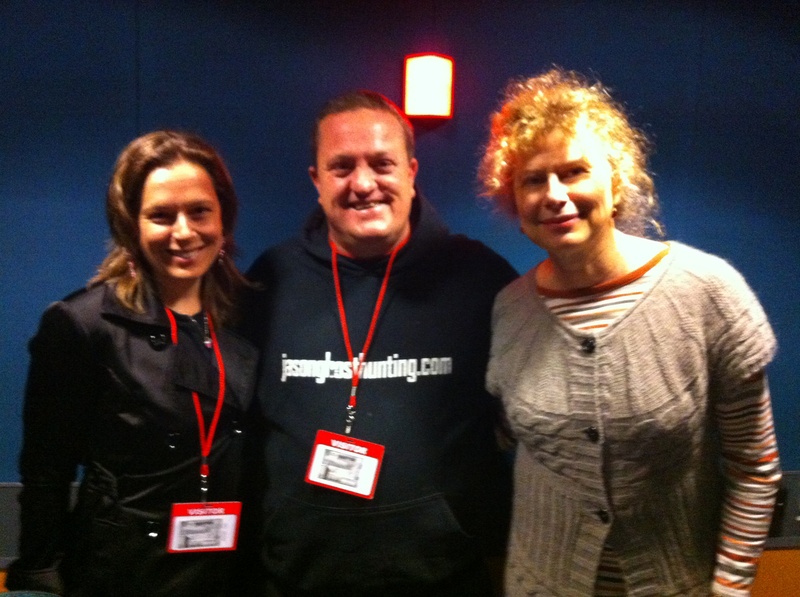 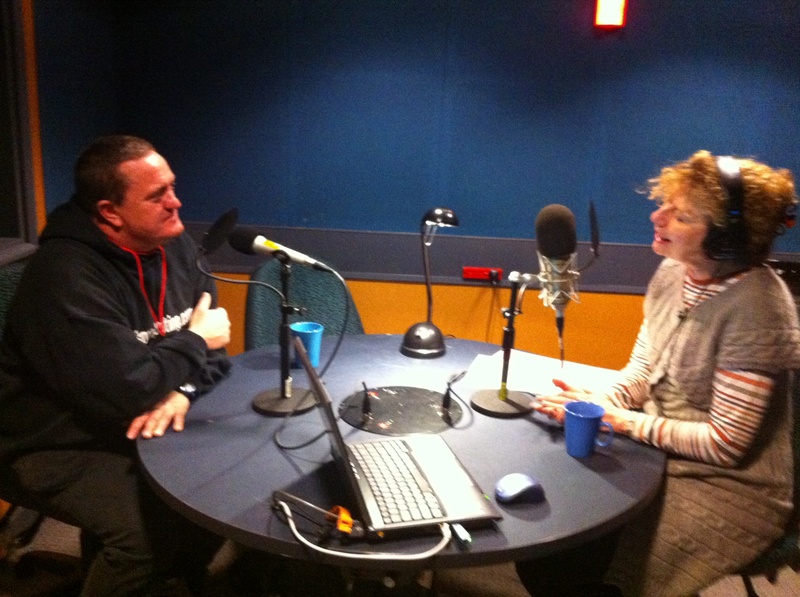 Me talking on radio 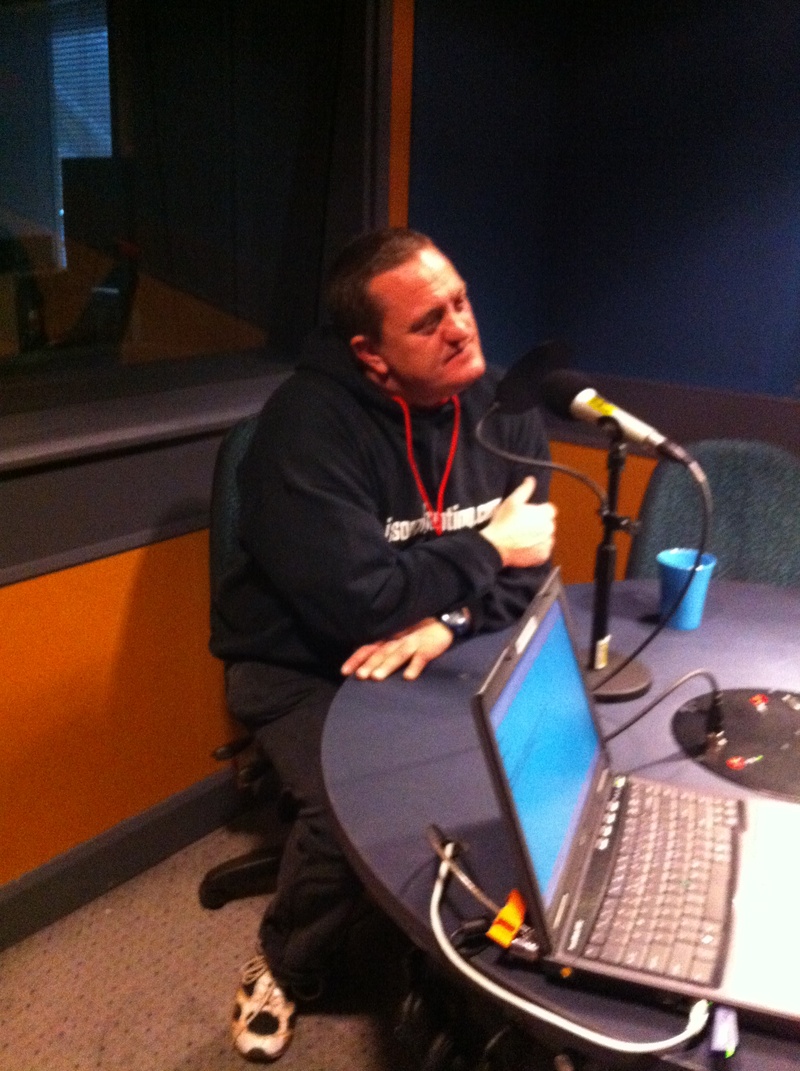 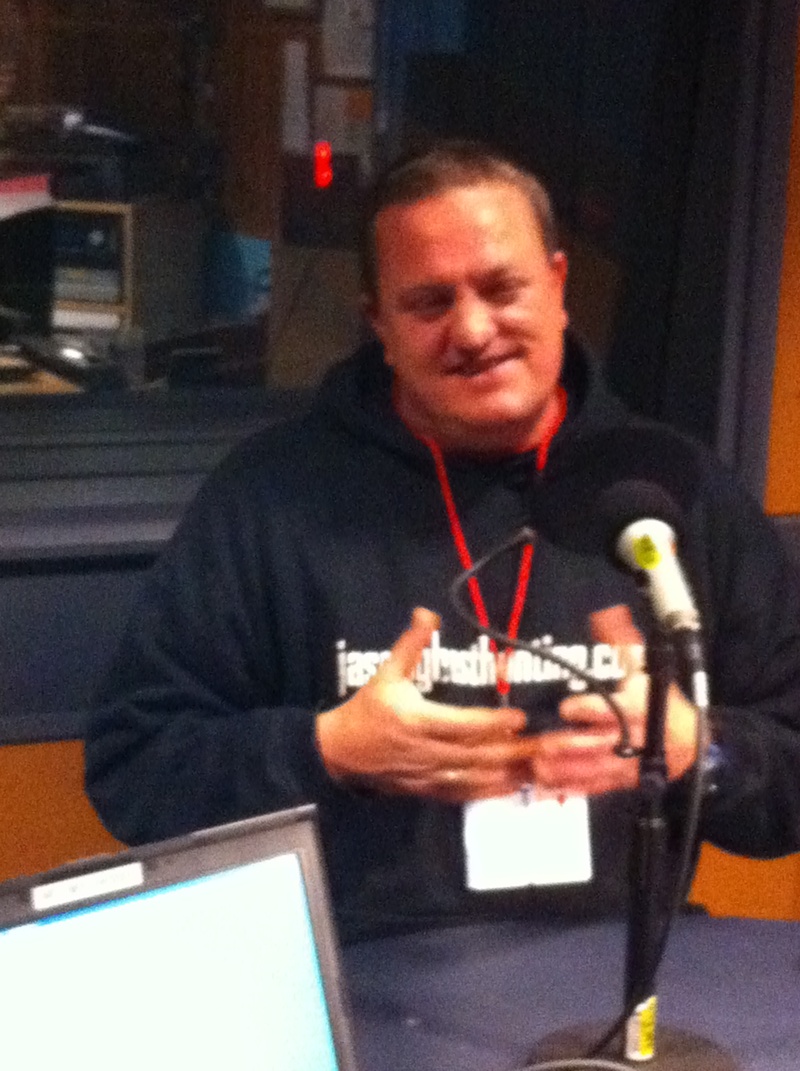 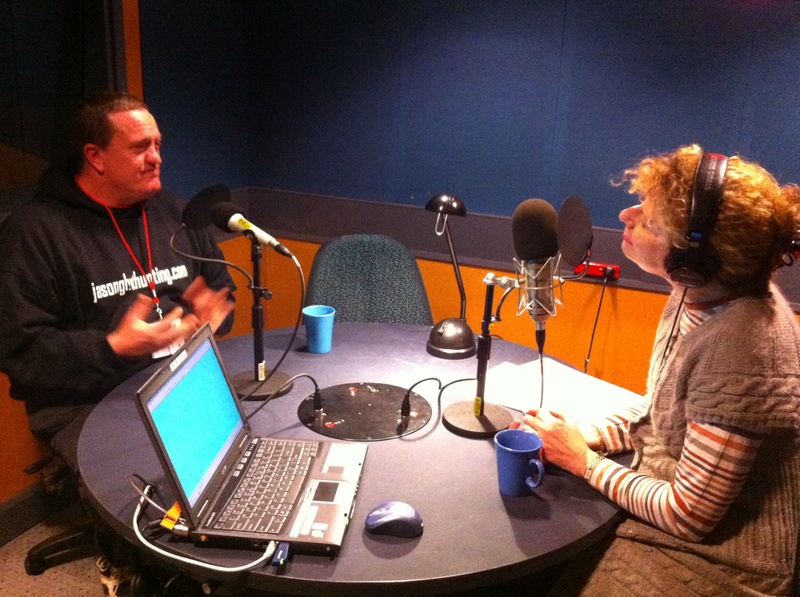 again a big thank you to ABC Radio

This is the link to here me on radio on ABC radio http://www.abc.net.au/radionational/programs/spiritofthings/haunted-houses/4124218 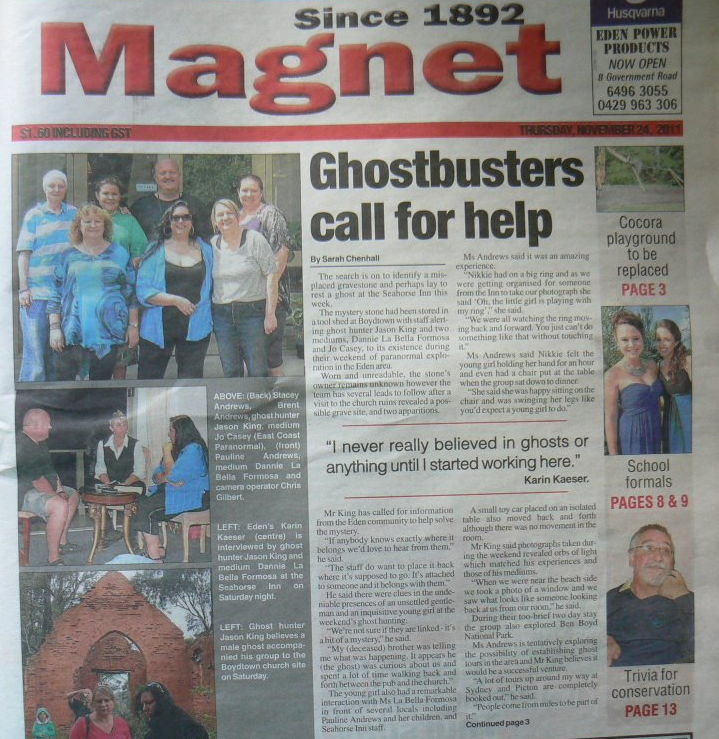 On the 03/04/11 i was interview by a ladie that come from germany  about my ghost hunting and we talked about what we do. the ladie is taking it back with her to show germany what i do. 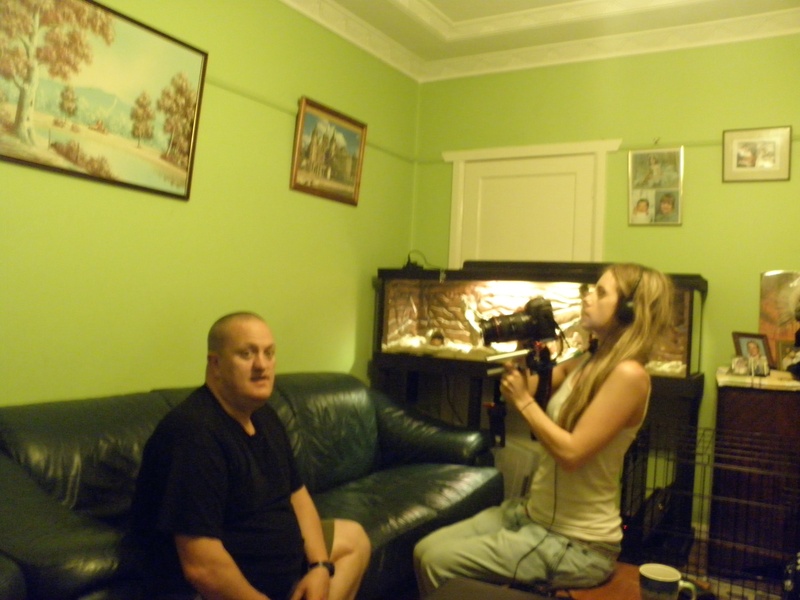 This is where the stories is going too  http://www.oddisee.tv/

So, who you gonna call? BY JOHN HOLDEN 19/08/2009 4:00:00 AM WHEN Jason King's dead brother Peter ``appeared'' to him at his home it sparked an interest in the paranormal. The Ermington security guard said he had regular conversations with his 25-year-old brother over a two-week period. ``He was as solid as any living person and we talked for several hours about this and that,'' Mr King said. Peter was killed in a car accident five years ago. Since the encounter, Mr King has developed an interest in ghost stories, organised ghost tours and begun investigating hauntings. Mr King and David Lawrence, of Girraween, have set up a website at jasonghosthunting.com to which people are invited to submit their experiences. Group members, armed with cameras and voice recorders, then investigate the site for sightings. Mr King said about 50per cent of hauntings can be explained. His first apparition was at the old Sydney quarantine station about five years ago. ``This hooded figure, about six foot tall, appeared in front of me and disappeared before I could take a photo,'' he said. His most hair-raising was when checking a toilet block in a building at Randwick early one morning. ``Suddenly I heard footsteps running behind me. I turned around with my torch in hand ready to clobber somebody but there was no one there.'' Mr King also claims to have seen an apparition in his home ``This little kid just standing in the doorway'' and at other times has heard a voice in various rooms. ``I'm not scared,'' he said. ``It's the people who are alive you have to worry about, not the dead ones.'' His next investigation would probably be Maitland jail where he said people have reported seeing shadowy figures. There were strange noises heard at the rear of Mr King's home while the Parramatta Sun was there but an investigation revealed nothing. Had a ghostly experience? Tell us about it at: 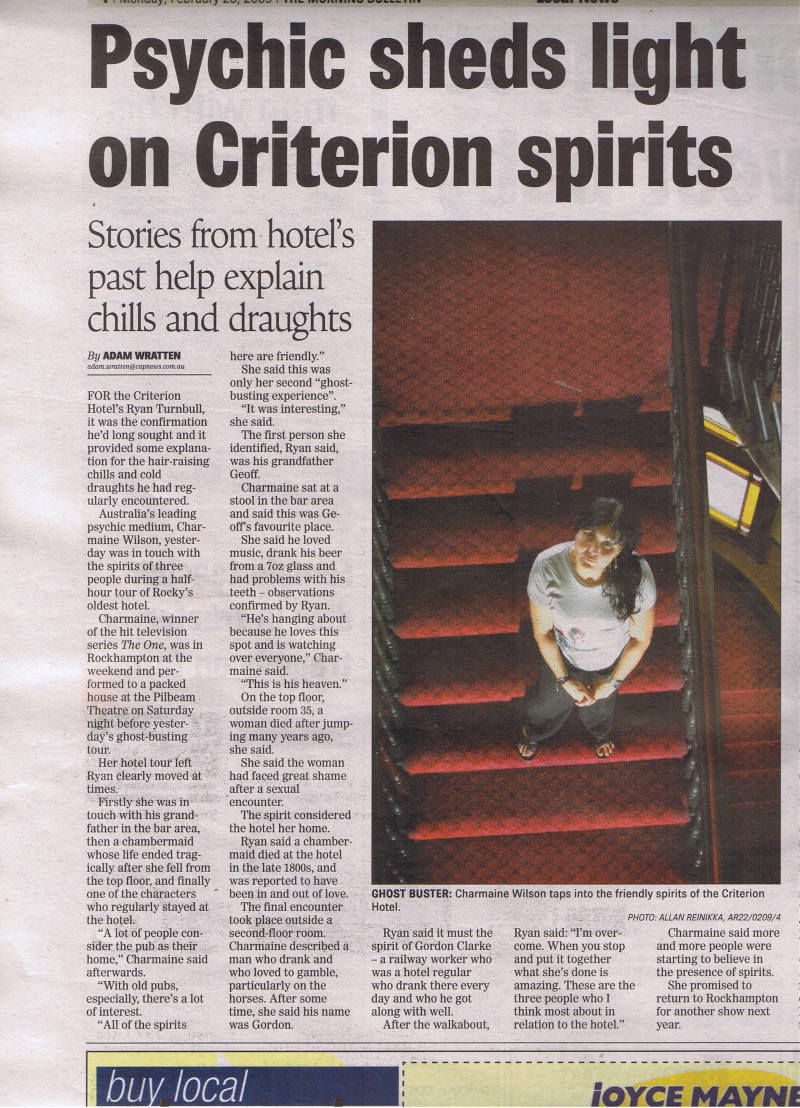 Are these the ghosts of a boy and girl who died 60 years apart?

Close up ... are the ghosts any clearer for you? / Pic: Renee English Source: The Daily Telegraph 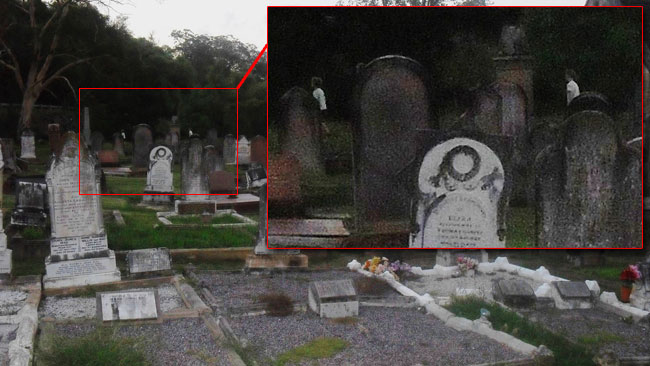 DOES this photo show the figures of two children, born more than half a century apart, walking in their paranormal playground?

The family who took this picture while on a Picton ghost tour swear there were no children inside the St Mark's Cemetery.

Which begs the question: Who, or what, is out there?

Local legend has it that the two children are David Shaw and Blanche Moon, who died 60 years apart.

Blanche was crushed to death in 1886 when a pile of sleepers that she and a number of children were playing on slipped.

David was the son of a minister who died in 1946 from polio.

Renee English, the woman behind the lens of this mysterious photo, said she was "a sceptic" before undertaking the ghost tour on January 9.

"When we were standing at the bank looking into the cemetery I was just snapping away and making jokes about the whole thing," the Port Macquarie resident said.

"I know that when I took that photo there was no one else in the cemetery.

"The only people we saw were a family of four about 10 minutes later but those kids were clinging to their parents the whole time.

"When we uploaded our photos and saw the children all the hairs on my arm stood up and I just went cold all over. That night I couldn't sleep at all and I'm never watching a scary movie again.

"I wasn't a believer in ghosts but now I'm intrigued."

Local historian Liz Vincent conducted ghost tours in Picton, claimed to be Australia's most haunted town, until her death last year. Since then her husband John and daughter Jenny Davies have taken up the mantle.

"We find people always love to see their photos afterwards because most of these things aren't visible to the naked eye."

One of the tour's most popular figures is Emily, a lady who was hit and killed by a train in 1916 while taking a shortcut through the Redbank Range Tunnel, also known as the Mushroom Tunnel, to visit her brother.

Emily Bollard resided near the railway line and was a single woman aged in her 50s. Before taking her shortcut, she didn't check the timetable and was hit in the tunnel by a train coming from Thirlmere. She died instantly.

"She likes to move among the participants and loves to touch their hair and body, particularly their arms and legs," Ms Davies said.

"Those on the tour often say that they've also felt a cold wind blowing through the tunnel." 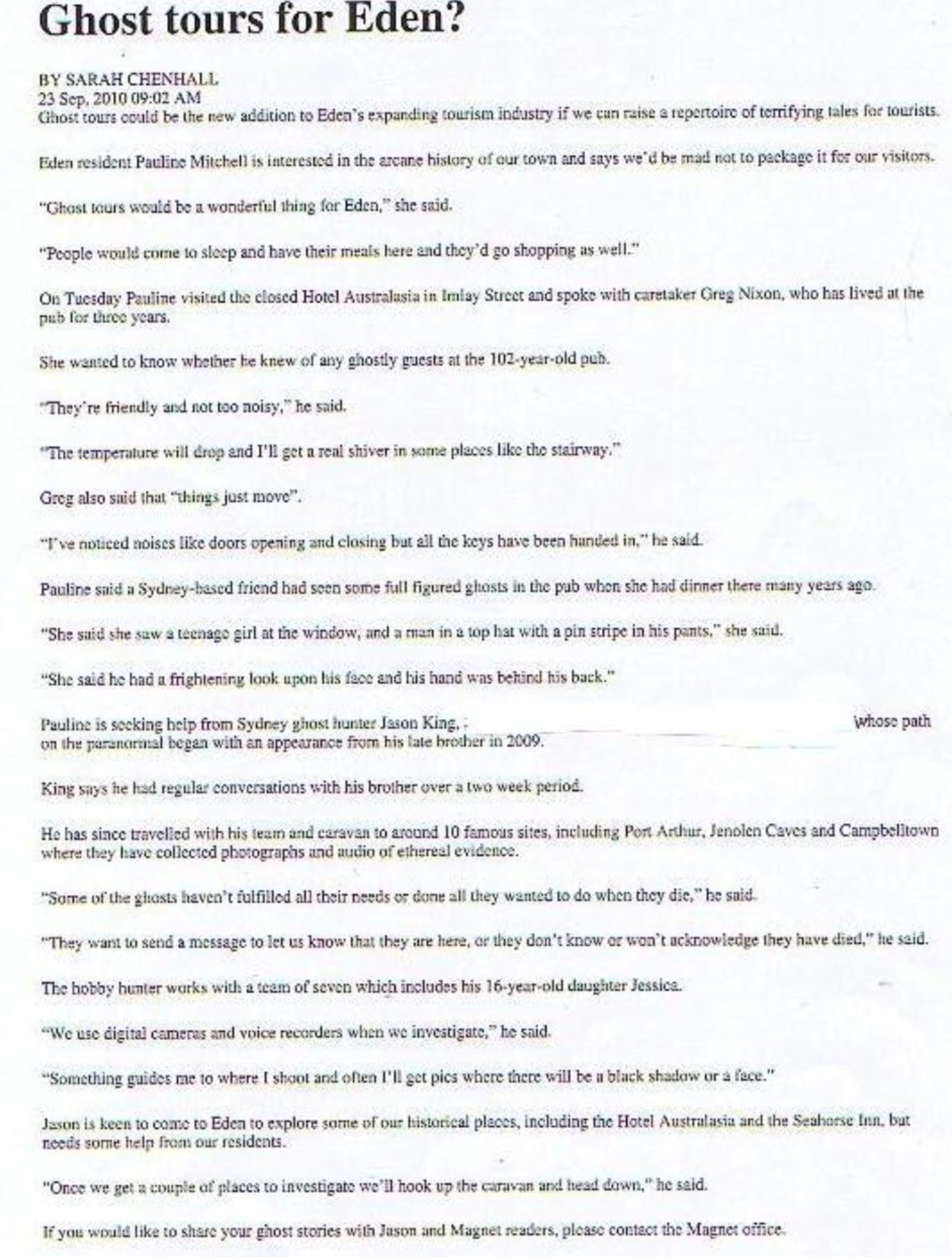 There is a house in St Georges Basin with a peculiar problem.

You cold liken it to apest problem, only the pest is somwhat elusive.

I'ts not really something the owners can put their finger on.  And it's going to take more than your typical exterminator to eradicate this problem.

Which is why they've called in ghost hunter Jason King and his team.

The residents, who did not want to be identified, said they were at their wit's end when they contacted Mr King

"it's hard to explane but it's like there is a black feeling here and lots of things keep going wrong," the resident said.

"people keep getting injured.  Appliances and machinery, even breand new ones keep breaking down.  I'm not easily scared but this is all making me feel uneasy. Something's going on.  There is something here," she said.

The ghost hunter made his first visit to the house on Thursday.

Mr king has been hunting ghosts for five years.  It was the death of his brother that started him off.

"he was killed in a car crash and for about two weekss after that I kept seeing him.  We would have conversations," Mr King said.

"His last words to me were " I will see you soon".

"Ever since then I've been out there searching.

I think he was trying to tell me something.  One day I might find him, but until then I'm finding ghosts for other people."

He said his ghost hunting raised a mix of issues and in some cases people just wanted someone to talk to about their ghost.

" Sometimes we find it's something that's simple to explain, but in most cases it's not ,"Mr King said.

" I can't say I don't get scared, I've certainly had a few surprises.

" I take a lot of photos then go through them looking for things that shouldn't be there.

" The next step at the St Georges Basin house is to get my researcher to look into this property and the surrounding area.

"We need to find out who had died around here and in what circumstances." he said.

" After that we do a full night investigation.

Apart from the unexplained, Mr King comes across his fair share of sceptics.

"I always tell people who don't believe me to join me on a ghost hunt," he said. 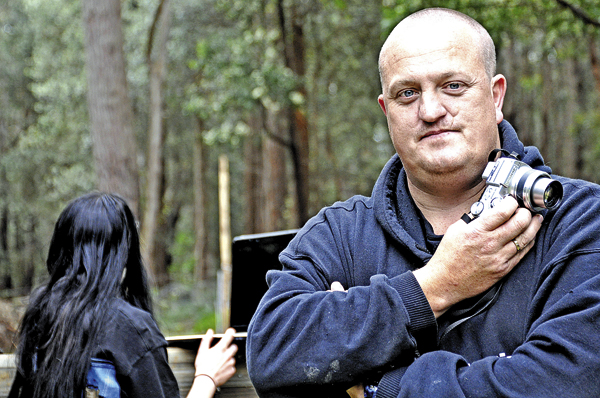 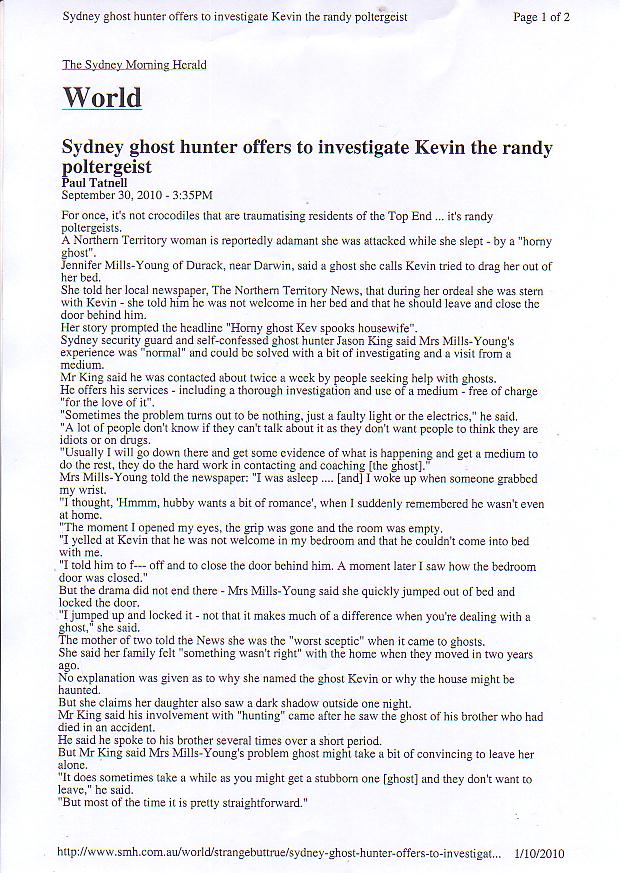